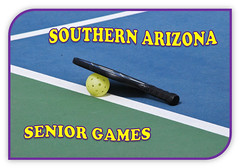 Canceled due to the Corona Virus

The following times are the posted event start times. Please report 30 minutes prior to your scheduled start time.
The Tournament had been cancelled

The remainder of the Southern Arizona Senior Games, including the pickleball event, has been cancelled due to concerns about the Coronavirus Disease (CIVID - 19).

This is a nonsanctioned tournament using the PickleballTournaments.com scoring system but will not affect your UTPR

*16 teams will be accepted in the 50-69 age group for each skill level. The division will then be divided into two 8 team brackets based on the age of the youngest partner. If two or more teams are at the same age at the cut-off positions, the age of both partners will be added together and the lower will go into division A. If fewer than 16 teams register the tournament committee will determine divisions.  More teams may be added if space permits.  Medals will be awarded in each division.

8 teams will be accepted in each 70+ division, more teams may be added if space permits.

In the case of combined divisions medals will be awarded based on the finish of teams in the division they would have played in had divisions not been combined.

No team will be accepted unless both players are registered and have paid.

REGISTRATION LIMITED AND WILL CLOSE WHEN FULL, SO REGISTER EARLY

Entry order and place on event player list will be determined by the online registration & payment dates of the latter partner of the team to register and pay (both team members must create their own online registration).  Registration is not complete until the waiver is signed and fees received.  Registration will be closed when the Tournament Director deems the courts are at capacity for the day.
Use PayPal, it's safe and easy.  PayPal account not necessary.  PayPal accepts most credit cards.

Players are reminded that the tournament is being conducted under the rules contained in the 2020 USAPA & IFP Official Tournament Rulebook.  A copy of which is available for download at USAPA.org. UTPR ratings will be used to determine playing brackets.

Registration has been changed to Monday, Feb. 3

Head east on Continental for 1.1 miles